Previously I mentioned how Sandra has blown me out of the water in terms of items she has had published in the past and I posted a card that she made and was published using my stuff.  Today’s post is another lesson in humility for me.  In the very same magazine in the very same issue (Canadian Scrapbooker Winter 2014-2015), Sandra also had this one published: 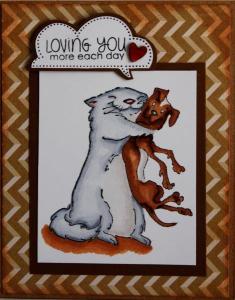 In this case,  she at least owned the stamp she used.  Aye there’s the rub (Ok Sandra that is from Shakespeare’s Hamlet, just so you know 🙂 ). She did not WANT to buy this stamp, when we saw it in a now “dearly departed” scrapbook store in Phoenix.   Oh no.  I insisted that she buy it, as she has more dogs and cats than the Old Woman in the Shoe has children.  She, under protest, gave in………..and what happens……………………….it is published while my entry once again was not.