Today we are once again making the backgrounds that we created in the last two days into cards.  I have made several more backgrounds that have not yet been made into cards, and perhaps they never will.  I can say however, that I have learned several things from this class.  One thing I have learned for sure, that I am not the only person in the world who goes through many steps and spends many hours producing one little card that may or may not get sent…….ever.

With this card I made a DIY diffuser.  Now I cheated a bit as I was a bit too lazy to glue numerous copies of a die cut together to make a diffuser shape.  I chose to use a Tim Holtz Bigs Die and grungeboard.  That way only two layers of the diecut needed to be glued together to provide the thickness needed to use it as a diffuser.  I used an embossing folder called Bohemian Botanicals and used bright bold colours to further the Bohemian look.  I sprayed (over-sprayed truth be told)the finished card face with Imagine Crafts Shimmer Spritz.  While the intense sparkle WAS the look I was going for, the aforementioned over-spray caused  the watercolour to run which was NOT a look I wanted. 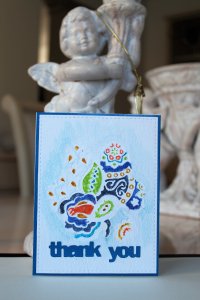 Overall, it is not a bad looking card.  I think using a diffuser was useful in this case.  If the whole card front had been embossed and painted this boldly, it might have been too much.