The 25 Days of Christmas Tags is a challenge put on by Tracey McNeely.   I thought I hadn’t participated in this one before, but then realized that I had a number of tags photographed in a file.  I would only do this for challenges.  The nice part of this is that most of them were used to decorate  real Christmas presents rather than to pile up in a shoebox.  Yay!  I do like making my own gift tags, and I have gotten some new tag making stamps and dies lately, so this blog challenge seemed like a good thing in which to participate, again.  Loads of sponsors and loads of prizes added to the attraction.

The idea is to seek inspiration from the tags presented by the design teams and create your own tag from this.  I only noticed this challenge today and it is already Day 5, so I have some catching up to do.  As I said, I have some new tag making stamps and dies, but for Day 1 I was inspired by the tag by Lindsay M-p which featured a cardboard box.  I have had the box die that I used from Neat and Tangled for a few years now, but it is one that gets pulled out again and again.  I had a different dog in mind for the box, but I decided to use this one from Simon Says Stamp instead, as they are the sponsor for Day 1.  Knit Picky from Lawn Fawn supplied the patterned paper and the Merry Christmas is from Tonic Studios. 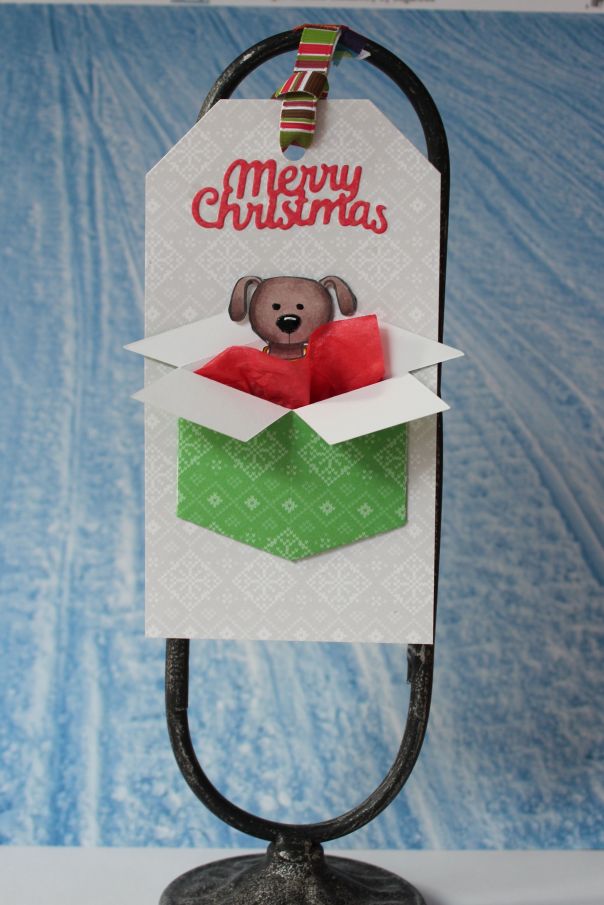