Not a card for Mass Production

I finally got caught up enough on things I had to do and cards that I had to make for one reason or another, so I could finally take a look at my Hero Arts kit for November.  It is once again a Christmas kit but more traditional than the 50″s theme of last month’s kit.

I started with what appears to be the most scene-stealing piece of the kit, which is the Fancy Die Door Front.   Holy intricate Batman…….it took me hours to painstakingly colour all those bricks with my Copic markers.  When that was done, the door swag required some fine colouring as well.  Then I realized that I had really just begun as the door opens and needs a full scene behind as well.  I decided that since I had spent so much time on it already, a few more minutes to pop the whole thing up to add some shadow and dimension seemed to make sense as well.

I am happy with the final result, but it was so much work, that I will find it difficult to actually mail it to someone this Christmas. 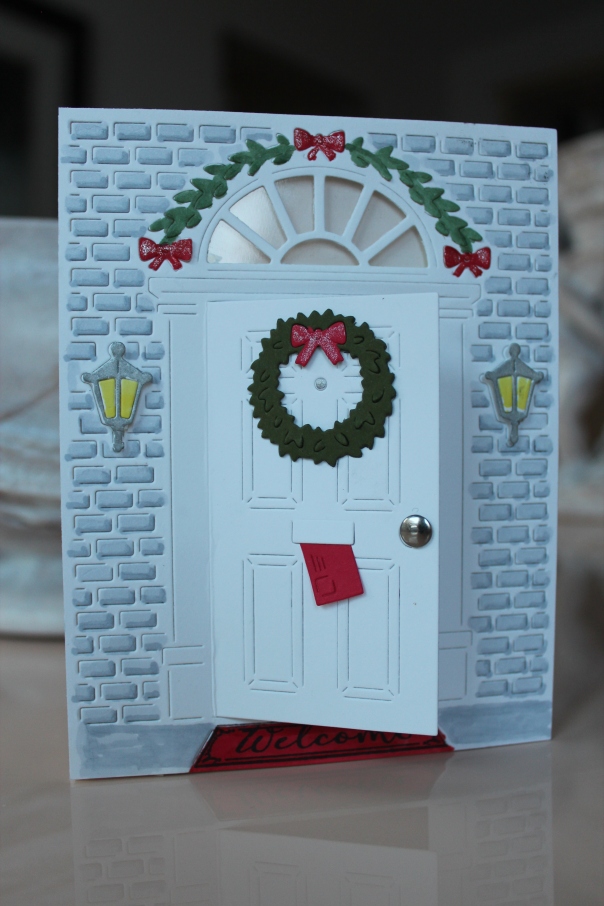 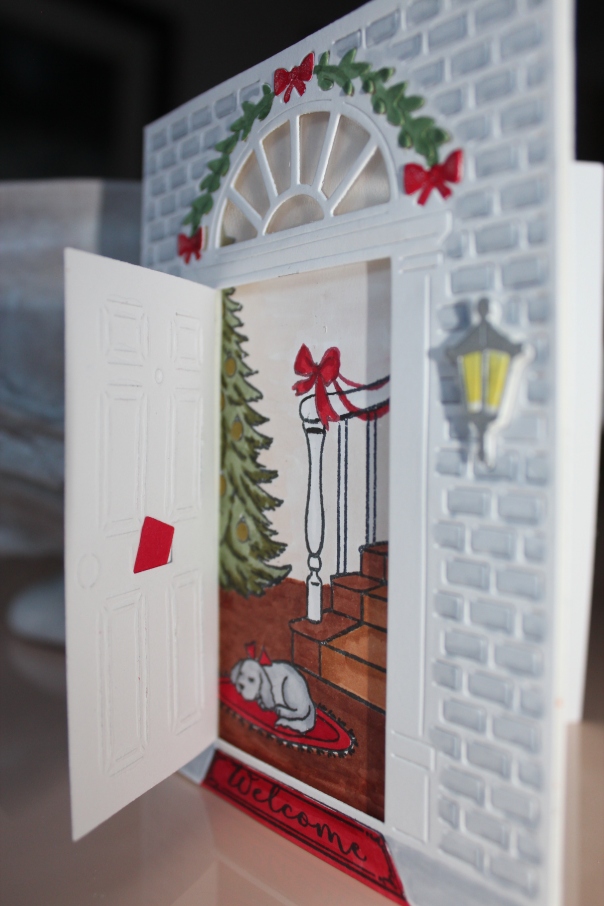 Simon Says Stamp has a stencil for the insanely popular Gnomes.  While I have already made some cards with the “sold out” large Gnome die, that I ordered for and stole from Sandra, this time I wanted a one-layer rather than pieced Gnome.

Using the stencil involved some extensive masking.  I may end up making my own layered stencil to avoid having to do all this masking in the future.  In the meantime, after a couple of ruined cards with some stray ink on them, I got it right.

This card is just so stinkin’ cute, that I am sure I will be making more.

I used the Swirls background die from Concord and 9th which just tucked around the Gnome perfectly.  Sequins from Lucie’s Little Things and some glittery Nuvo drops complete the card.  His nose is made with transparent pink Nuvo drops and gives perfect colour and dimension. 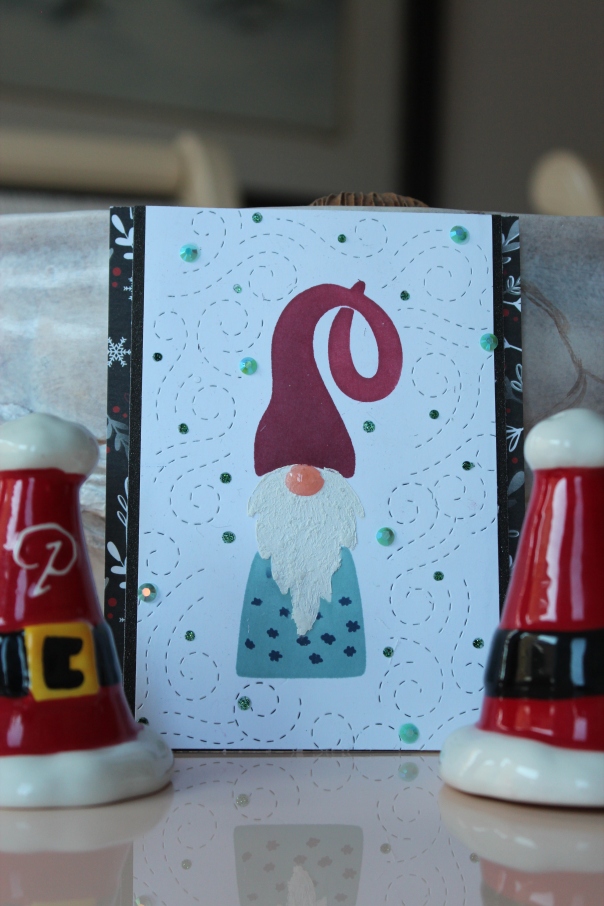 I wasn’t expecting any mail today as it is Remembrance Day but my doorbell rang and there was this month’s Hero Arts Kit.  YAY!

I just had to use the tri-fold trees add-on die first.   It is so easy to use and made a beautiful card in minutes. 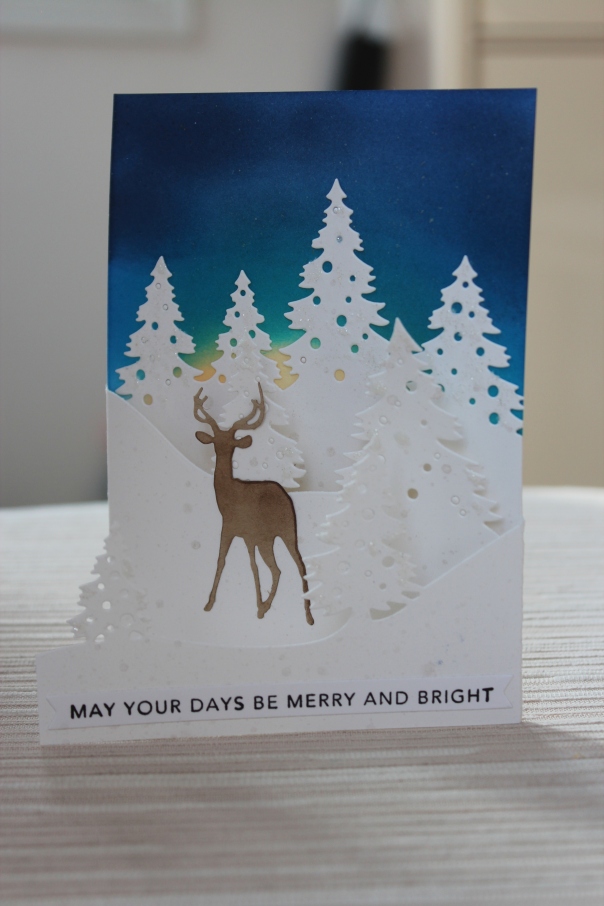 Today I made a Christmas card into a coffee card using a Hero Arts Stamp and Die.  It is a layering stamp that lined up easily and resulted in a realistic (If a talking Llama in a scarf can even be considered realistic) image. 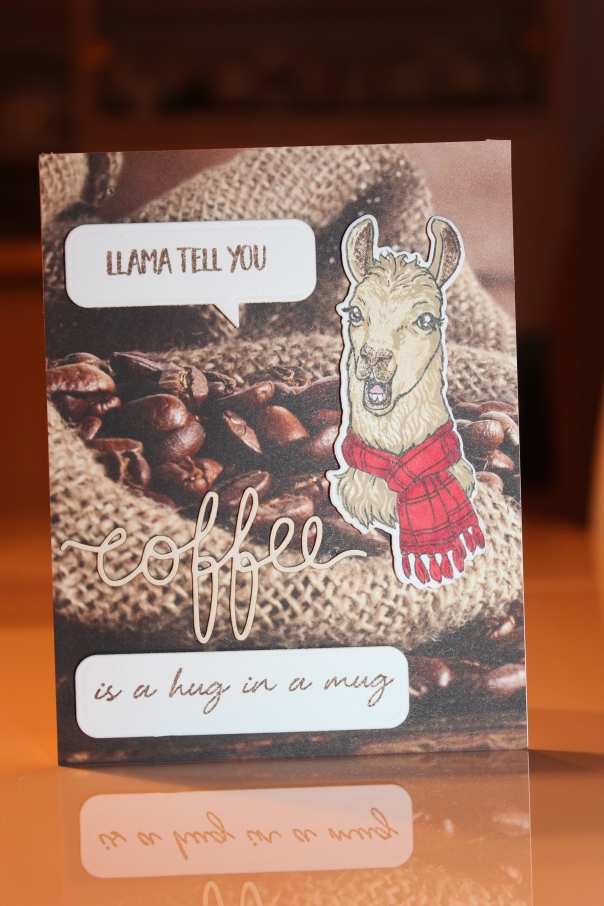 For today’s card, I used digital paper that I won in a previous Coffee Lover’s Bloghop.  I do apologize as I can’t remember which sponsor it was.  The coffee cup die is from Sugar Pea Designs. 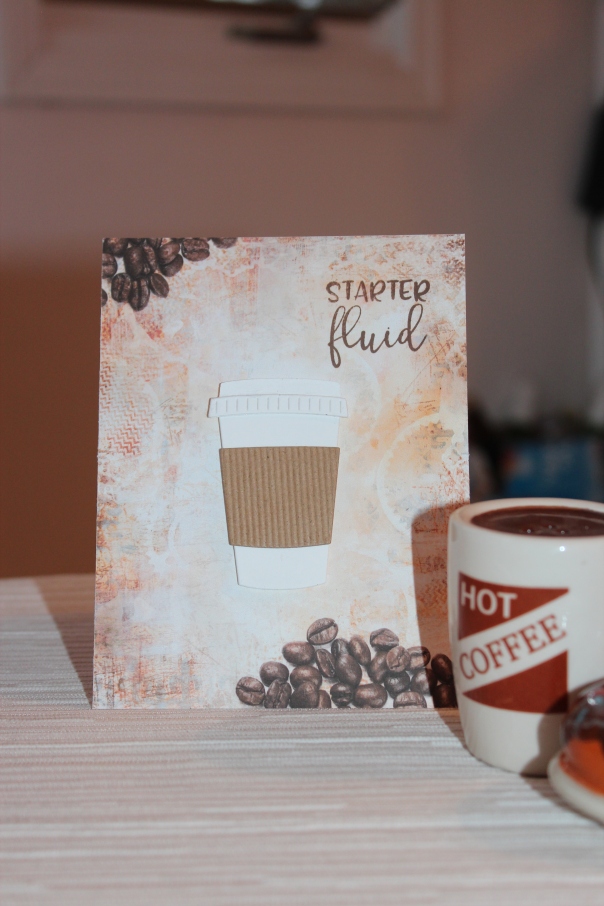 The sentiment is from Gina Marie Designs.

A funny thing happened on the way to making this card.  On the weekend I attended a local Scrapbook Crop.  As usual, I took away too much stuff for a one day crop.  Anyway, I must have pulled a muscle in my neck loading and unloading totes full of supplies.  When I got up the next morning, my neck was incredibly stiff and sore, but hey, the cardmaking must go on.   I took a muscle relaxant and applied a heating pad and began crafting this card.  Well, don’t you know, I fell asleep with a full cup of coffee in my hand.  The coffee fell out of my hand and into my box of coffee stamps and dies.  Needless to say, that was quite a mess to clean up.  On the bright side, I do have a large box of authentic  Coffee “scratch n sniff” crafting supplies now.

I am happy to report that no cards were injured during this card-making session, and I was happy with this one. 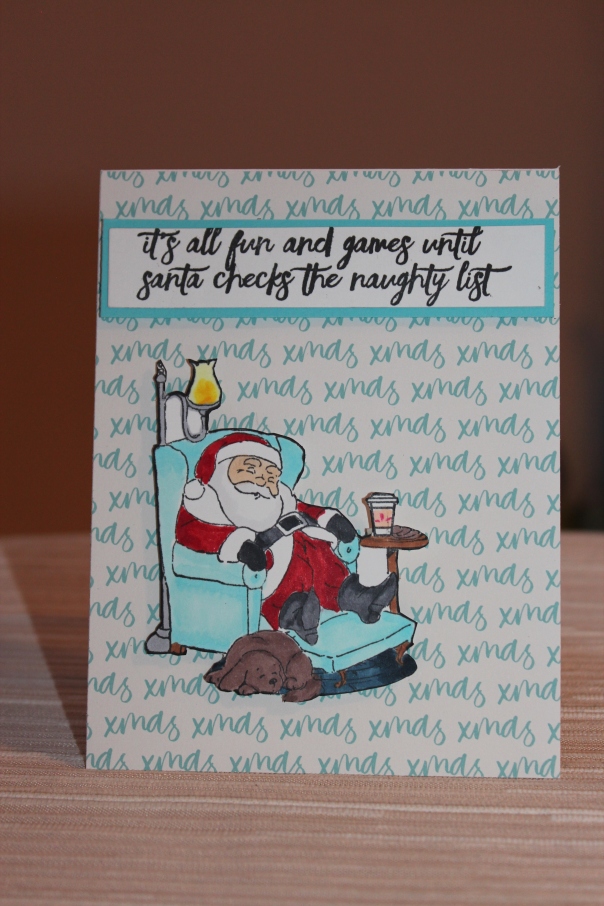 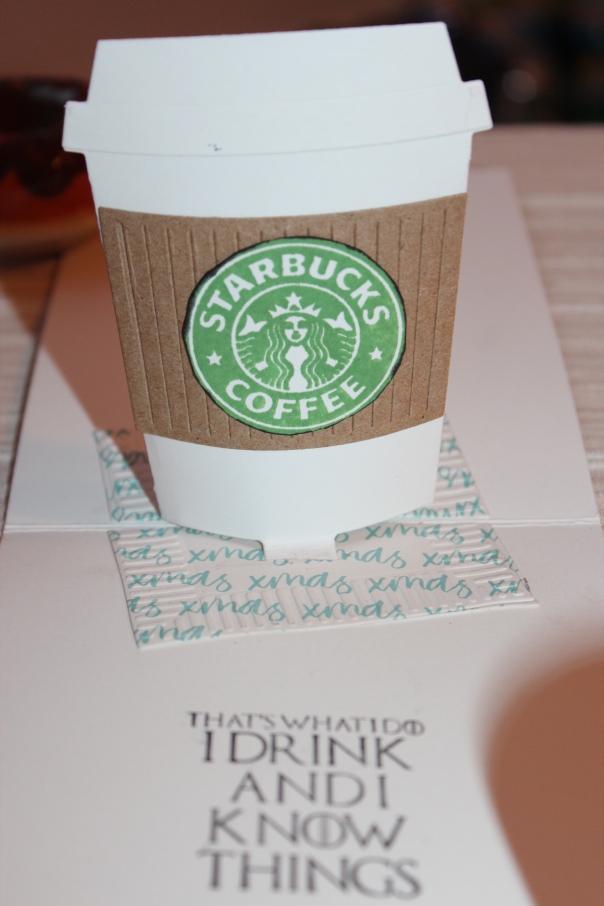 I apologize for the poor photography. 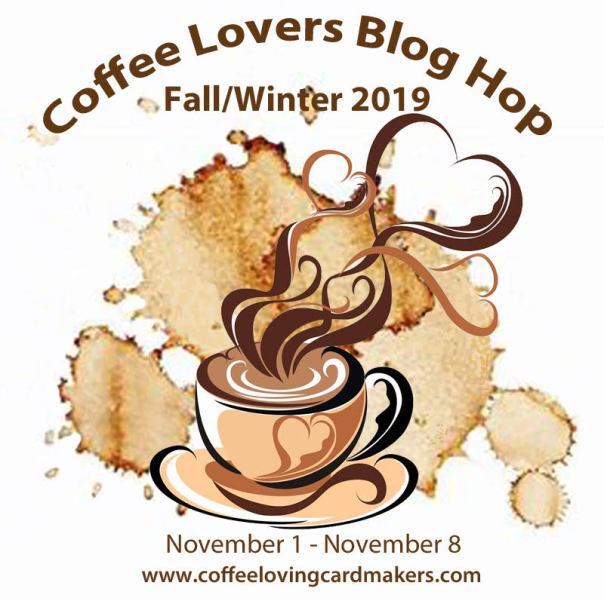 I have made one more coffee card using the Kringle collection from Photoplay.  This time I also wanted to use a “Coffee Charms” die set that I have from Karen Burniston.  I finished the card off by adding a Polar Bear from Recollections who is looking up longingly at the string of coffee beverages.  The sentiment is from Verve Stamps 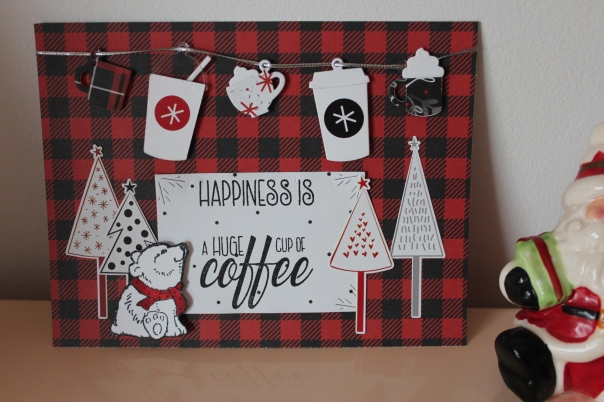 I am continuing to have fun with the Kringle collection from Photoplay.

It is fun to see how coffee and Christmas can be combined into a cute but easy to put together card.  This time I used a sentiment from The Cat’s Pajamas. 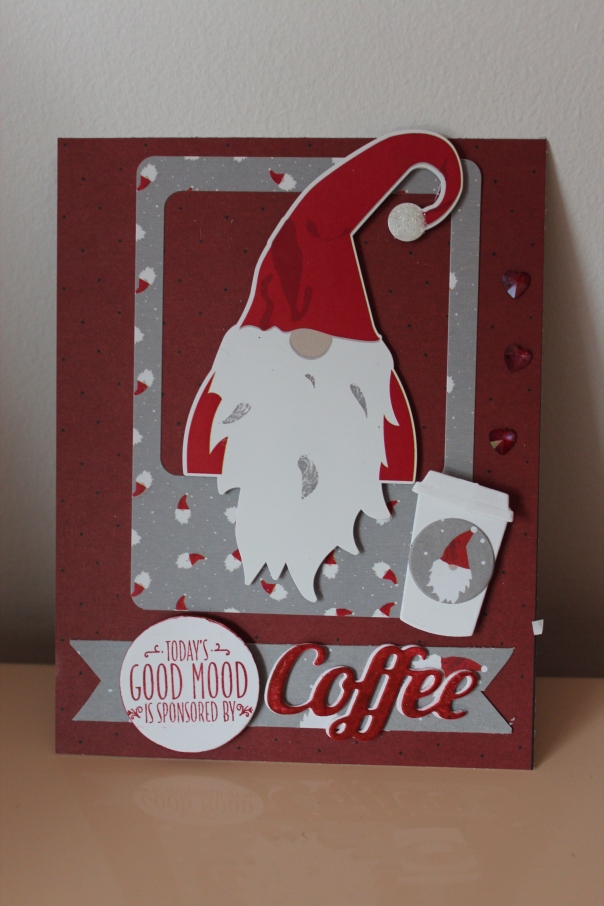 It is the time of year for the winter version of the Coffee Lover’s Bloghop.  It is also a busy time of year with Thanksgiving, Halloween and Christmas card making time all on the  heels of each other.

This lead up is to explain my excuse for it being Day 3 of the Bloghop and I am just posting my first card.  It is also Crop/retreat time and yesterday I attended one.  I bought what I thought was a regular collection kit from Photoplay called Kringle.  Once I ripped into it, I realized that it was actually a Christmas Card kit.  That was an OOPS as I rarely buy card kits and my intention was to make coffee cards of my own design.  Oh well,  I found that it was a very cute collection and after making a few cards, I actually purchased the matching collection kit and ephemera so that I could make some additional Christmas cards.

Anyway, I think the coffee cards turned out well, and they will come in handy for giving out some coffee gift cards at Christmas time.  The sentiment set is from My Favorite Things and is called Sassy Pants Holiday too.  The original stamp has the word wine and I just substituted coffee for this occasion.

Here is the card: 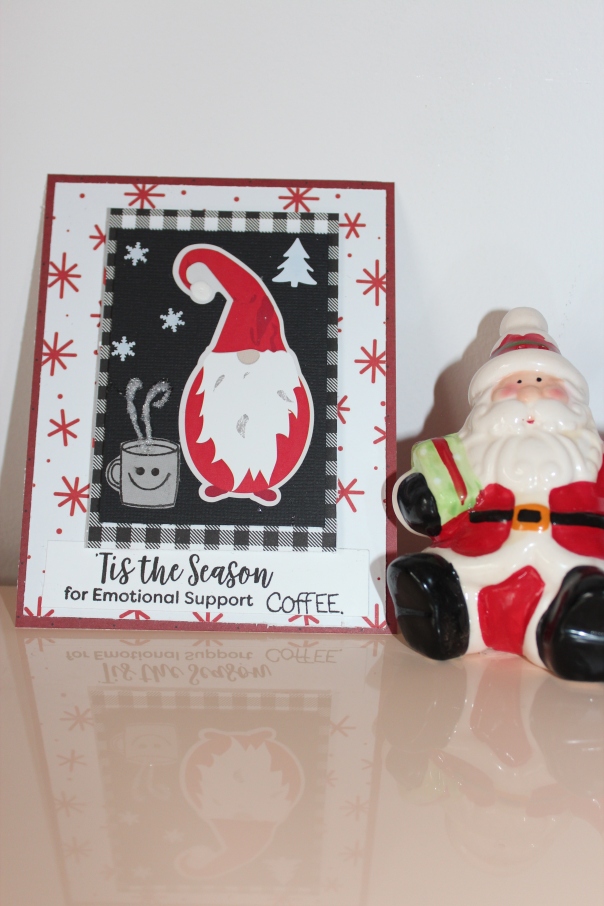