Today’s lesson at Online Card Classes was taught by Debby Hughes and was to use a die-cut first as a stencil on a card front and then to use that painted up stencil as part of a second card.  I am often surprised to learn that something I thought was going to be easy is not and vice versa.  This is one of those times.  I pretty much love everything that Debby Hughes does, and I was expecting to make something at least somewhat similar to what she did.  It was not to be.  My first attempt ended up as the background to the background on the first card.  It was a colossal failure, in all honesty.

I changed dies and tried again. My second attempt was better, and I kept telling myself that if I didn’t like it……………it was just because it wasn’t finished yet.  You know, that kind of worked, as the finished product looks ok.

Here are the two resulting cards: 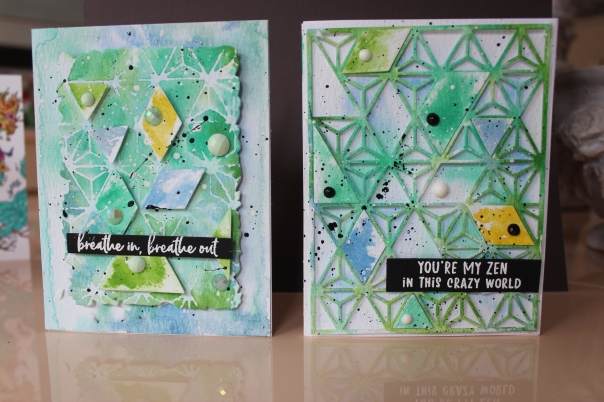