Oh my goodness! I thought I would never see the day where I did not want to spend another moment thinking about how to create another card or layout , but that day has arrived.

Today, I took part in a virtual crop to aid the tigers at the Calgary Zoo.  The challenge was to do something crafty every hour on the hour for 24 hours.  It wasn’t always a new challenge that involved making a card or layout, sometimes it was a tutorial or quiz or zoo animal jokes.  Whatever it was, 24 hours of it is exhausting.  I think I posted 14 projects.

Now I want to post today’s lesson in the Spring Card Camp as I don’t want to get behind on it.  Today’s lesson was by Kathy Racoosin.  She is the queen of colouring.  Today she took an unusual method of colouring.  It involved creating our two for one cards by allowing the Copic markers to bleed through to a second card front.  My first attempt was a complete fail as cardstock of any weight was too thick.  the only thing that worked for me was typewriter paper.  We were to use the back of the first layer and the top of the second layer for our two cards.  I did not care for the back of the first layer at all, so that was a no.  The cards didn’t look tooooo bad when I dressed them up with a mat and some bling, but I have to say they are not my cup of tea.  However, it was an interesting technique to try out.. 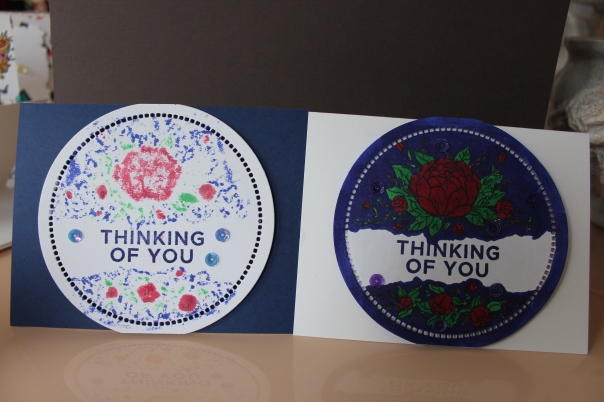