Sandra has made a card and actually sent it to me to put on the blog.  This is a momentous occasion folks.  The world’s busiest woman has found the time to sit down and do some crafting.

Sandra and I are going to Retreats two weekends in a row this month, so a crafting storm is a brewing.  In the meantime, here is Sandra’s entry into the Paper Smooches Anything Goes Challenge:

Patter Paper is My Minds Eye

Cardstock is Recollection and Xpress It

The theme of this month’s challenge is friendship.  Who could resist the inspiration photo.?

This is an interaction between a squirrel and a bird and that got me to thinking about an interactive card to depict friendship.

I had these “scratch off” stickers in my stash and I thought they would be fun to use.  The card just evolved from there and I think it has a nice degree of cuteness overload!

Just for the record,  my “go to” stamp set Great Chemistry once more came to the rescue to provide the question marks on the stickers.  There was a fair amount of colouring on this card, so I was hesitant to actually scratch off the stickers and render the card “useless.  I did want people to see how the scratch off stickers worked, so I closed my eyes and did the scratching.  The card just turned out so cute, I know I will make another one to really send in the mail.

I had a couple of new to me Paper Smooches stamp sets in my new drawer.  I thought that this month’s challenge would be an opportunity to try them out. The problem was that one of them had absolutely nothing to do with the subject of summer.  It is the stamp set called Off the Charts and has graphs and pie charts and the like.  It looked more like school than a beach!  What to do?  Using the”Got Lemons, Make Lemonade” philosophy, I decided to make a scene depicting “Summer School”!

In the end, I pulled out just about every Paper Smooches stamp set I have, to pull together this card.  I have to mention that the stamp set Great Chemistry from Paper Smooches gets my personal award for versatility.  I have made the Chemistry Professor into every one from a monster, to Mark Twain and to today’s Beach Bum.

In fact, I am going to post the Mark Twain card here today as well.  My co-blogger Sandra told me that I was probably the only person in the world, that would see the humour in this card.  Probably, has something to do with my interest in the history of English literature, which is not a wildly popular subject among cardmakers.  Anyway, she was right as it did not get picked for publication on a theme about Mark Twain quotes……………………sigh.

Still and all, my little Chem Prof is pressed into service today as a hairy-legged beach bum, and I think he is adorbs.

Here he is in his role as Mark Twain.  He even LOOKs like Mark Twain! 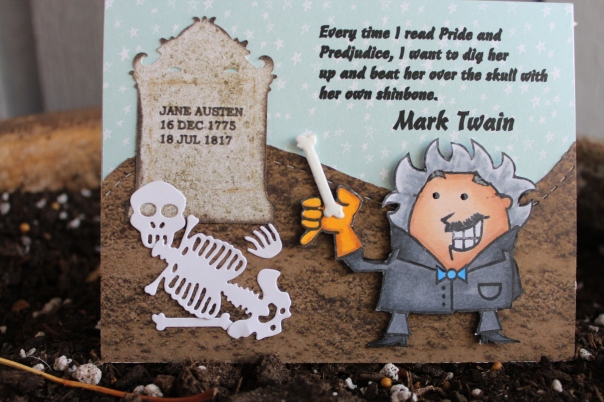 I was a bit surprised when Paper Smooches announced that June’s Challenge was to use layering.  I don’t usually think of layering when using Paper Smooches simple cute designs.  But hey, you don’t have to tell me twice, layering it is.  In fact, I kind of went bonkers with the layering.

I have to say that I love this card.  Not only is it cute and colorful but I actually have someone in mind to receive this card.  My niece is renewing her marriage vows in Maui later this summer.  How perfect is this card for that occasion?

Sandra has made a card that shows that you can do CAS with layers.

It’s a rainbow from Sandra

This month’s challenge at Paper Smooches is Rainbows.

Here is the inspiration:

And here is Sandra’s entry:

The theme for this month’s challenge at Paper Smooches is rainbows.

I often find that Paper Smooches images look best on CAS cards with lots of white space.  That is good, as this is one of my favorite styles.  The challenge for me is making something distinct from other cards while remaining CAS.

I need to add to my stash of Paper Smooches stamps for sure as most did not lend themselves to a rainbow theme.  At least at first glance it seemed like this, but I found something that would work and off I went to put something together.

Using a rainbow always makes me happy, but the other thing that made me happy in making this card was the fact that I used my Tim Holtz distress crayons for something other than just testing them out. Yay!

Paper Smooches theme this month is flowers.  This gave me a break from snowflakes, Santas, glitter and foil for a bit, so I was up for giving it a try.  I think the card turned out well, even though the busy, full, realistic explosion of flowers is not what I usually think of for Paper Smooches images.  This card size is A6.

The challenge at Paper Smooches this month is to use gold.  I had started to make something for this challenge quite some time ago but didn’t like something about all my attempts.  I wanted to use gold foil and I find that if you use foil, then everything else on the card must be pretty simple or things seem to clash.  After several too busy or clashy attempts, this one seemed to work.

Paper Smooches Challenge-Sandra was distracted by something shiny

It appears that Sandra found something shiny and decided to use it on a card.  The result is a clean and simple card that turned out ultra nice.